Learn More, do Nothing: The Importance of rest and renewal

Would you like to be more creative?  Learn faster?  Super, all you need to do is… Nothing.

October 9, 2010 update:  Check out Bobbi Newman’s post on the connection between innovation and working less. The New York Times reported this week that researchers at the University of California, San Francisco have found that rats don’t learn from experience until they take a break from the experience.  The break gives them time to process and create persistent memories.  Furthermore, the researchers believe that their findings almost certainly apply to the way humans learn. Uh oh…

Why uh oh?  Because many humans are increasingly connected to our ipads, blackberrys, smartphones, and laptops, keeping our brains engaged continually throughout the day.  And while all of that ubiquitous connectivity offers us the possibility of reaching heretofore unreachable levels of efficiency and productivity it seems that it might come at a price:  The Times reports that “when people keep their brains busy with digital input, they are forfeiting downtime that could allow them to better learn and remember information, or come up with new ideas. ”

Having recently started a new job, I can attest to the fact that there’s nothing like a silent drive or a brief nap to process and organize a great deal of new information.  My 45 minute commute home might be the most productive part of my day, as that’s where all of the sense-making is happening.  Strange as it may seem, sleeping has also been incredibly productive as I awake many mornings with a number of ideas synthesized from the previous day’s conversations, observations, and readings.

So as we come to the end of another summer and start getting geared up for the busier days of Fall let’s take a moment to remember:  There might be no better way to learn than by stopping, unplugging, and doing absolutely nothing.

Research confirms: Goofing off at work makes you a better employee

A new study by a bunch of Australians with too much time on their hands confirms what Library Garden has previously reported: Not working makes you a better worker. 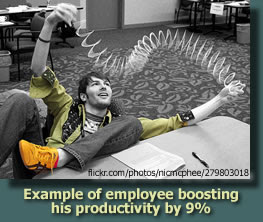 That’s right folks! Employees who surf the net, check Facebook, send some tweets, or regularly check on the latest Brangelina update (are they pregnant? are they adopting again? does Jennifer Aniston always have to be mentioned in these articles?) are actually MORE PRODUCTIVE. Don’t believe me? Here’s what Wired reported:

The University of Melbourne study showed that people who use the Internet for personal reasons at work are about 9 percent more productive that those who do not.

Isn’t that great? But wait, it gets better. There’s even a new pseudoscientfic euphamistic acronym:

So the next time you’re caught watching the sneezing baby panda video you can confidently look your supervisor in the eye and say, “Goofing off? Why no boss, I was WILBing. Scientific research has proven that a good Wilb makes me 9% more productive.”

If your boss still has a problem with your wilbful behavior, you can claim, “I just have a bursty style, not a busy style, which means that although it might appear to the untrained eye that I’m never actually working, you’ll notice that all my work actually gets done.”

If this line is delivered correctly, it will create a moment of confusion as your boss ponders the busy/bursty conundrum, giving you a small window of opportunity to slip away for a donut break.